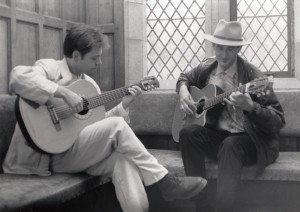 Scaramouche represents a departure from Stephen Caudel’s usual symphonic style of composition. It came about as a natural development of guitar collaborations with talented classical/Latin American guitarist: Tim Panting. The two guitarists first came together when Stephen was invited to do a major tour with Art Garfunkel throughout major venues in the UK culminating with three nights at the Royal Albert Hall. (Right: Stephen rehearsing with Tim)

To this end, Stephen created arrangements for two guitars of excerpts from his Rock Symphonic composition ‘Wine Dark Sea’ and after asking around various music business friends, he was introduced to Tim who would play an accompanying role in the forthcoming tour. After the success of this and indeed subsequent tours, Stephen and Tim collaborated on writing some new material and also perfected arrangements of some Classical and Jazz standards and the logical end result of all of this was a new CD recording: ‘Scaramouche’.