The Edel Rhapsody for Wagner Tuba and Orchestra

The Edel Rhapsody (pronounced Aydel) for solo B-flat Wagner tuba and Orchestra had its World Premiere in Carlisle Cathedral on 12th June 1993. The concert, supported by Northern Arts is  believed to be the first time that a work for Solo B-flat Tenor Wagner Tuba and Orchestra has ever been performed anywhere in the world.

Due to a significant rise in popularity of the Wagner Tuba, there has been increased interest in the Edel Rhapsody and Caudel completed a full revision of the score in 2015. First performances have included two in the United States – US Premiere October 2018 and most recently February 2019.

The latter featured notable Cleveland hornist Tren Cheshier with one reviewer saying:
” In the hands of principal horn Tren Cheshier, the Wagner tuba sang like a world-famous balladeer. References to composers from Holst and Vaughan Williams to Grainger, Mendelssohn, and Mahler, floated by as the soloist spun out melodies in brief contrasting sections. A deftly handled shift in key near the end concluded the performance with a glimpse of the beautiful and unexpected.”

For more details on the US performances see the News item ‘In Performance: Edel Rhapsody’.


Concert reviews of the 1993 World Premiere include: 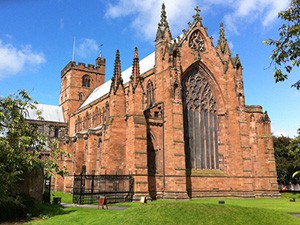 ‘It is a Saturday evening in June in the city Cathedral. The orchestra is seated in front of the main altar and the audience in the chancel. The brief overture to Mozart’s Idomeneo has just concluded when a soloist in black gown carrying an unusual brass instrument moves to a solitary chair near the conductor. The string section, then the woodwinds, provides a gentle tonal setting for the sonorous deeply-timbred sound of this instrument as it introduces the first melodic theme. At the close of this moving and memorable rhapsodic piece, the soloist stands to resounding applause, the conductor raises the orchestra, and the composer is called to stand beside them for the audiences praise and congratulations. It is Carlisle Cathedral where Simon Wright has conducted the North Pennines Orchestra in the world premiere of the Edel Rhapsody for Wagner tuba and Orchestra. It is the first ever work to be scored for this combination by the Cumbrian-based composer Stephen Caudel and the most recent success in a dedicated career in which he has achieved many things in a wide variety of musical fields.’
North by North West Magazine

‘Full marks to composer Stephen Caudel for creating the Edel Rhapsody for the Wagner tuba and orchestra. It’s premiere took place on Saturday in Carlisle Cathedral by the North Pennines Orchestra. This was a double first for the city – not only a Premier but first-time use of the instrument in the solo capacity with orchestra. If mention of the word tuba led some members of the audience to expect instrumental antics of a non-too-athletic kind they were in for a pleasant surprise for in the soloist’s hands the Wagner tuba showed versatility well able to sustain a prima donna role. The sweet toned lyricism of the opening theme of the Rhapsody was immediately captivating. So too was the ensuing scherzo section which lent pleasing contrast with some hunting-horn pyrotechnics. Far from being an anti-climax the rest of the concert which had started with an alert performance of Mozart’s Idomeneo overture went from strength to strength under Simon Wright’s inspiring direction.’
The Cumberland News

Here reproduced are the programme notes from the concert:

“It is not everyday that a composer has the opportunity to create a world first and for me this was a challenge I could not refuse.

The Wagner tuba was developed by Adolfe Sax and first exhibited at the Paris exhibition of 1851 but, since that time, has mainly been used only in sections of four in large orchestral works, notably those of Richard Wagner.

When I first heard the instrument at close quarters I was immediately struck by the richness and fullness of its tone and to me this suggested a work in which the Wagner tuba would be featured in a lyrical and romantic vein.

The Edel Rhapsody therefore along with most of my musical output represents a return to the ‘late romantic’ ideals of melodic and emotional intensity, values coincidently championed by Richard Wagner who first made good use of this wonderful instrument.”

Back to Orchestral Main Page