* UPDATE * – Stephen has completed a reworking of the original orchestral score and a new recording now available on CD: RETURN TO WINE DARK SEA

The World Premiere of Stephen Caudel’s Guitar Symphony ‘Wine Dark Sea’ took place on 24 July 1983 at the Victoria Palace in London. Stephen wrote a set of ‘composer’s notes’ for the printed programme of that Premiere which give a valuable insight into how this unique work came into being ….

“The question has been asked of me: “How did you come to write a guitar symphony?” The answer is simple. I didn’t. In a way, it wrote itself.

Wine Dark Sea is a natural development in the life of a composer with such diverse influences as Jimi Hendrix, Gustav Mahler and Richard Wagner. It is a work created specifically to place classical/rock guitar music in a highly melodic form into the concert hall/theatre, much as Gershwin did with jazz piano music in the 1920’s and ’30’s.

Wine Dark Sea is fundamentally a symphonic poem in the tradition of the late 19th century romantic movement, in that it is based on a programme or literary idea. In this case, it is Homer’s epic ‘Odyssey’ with its legends of Odysseus, the Cyclops and the Sirens which is the story from which the title is drawn.

Wine Dark Sea features the guitar very prominently in many guises and not surprisingly, considering that I, the composer, have been a player on that instrument for many years. In fact, the guitar is, in my opinion, a wholly neglected instrument in the concert hall in stark contrast to its prominence in all forms of popular music. It seems that it only has a ‘serious’ place in music when it utters Spanish tones; an understandable situation in years gone by but unforgivable in the 1980’s. None of the guitars featured in this work are in the Spanish idiom, and are written for as follows: 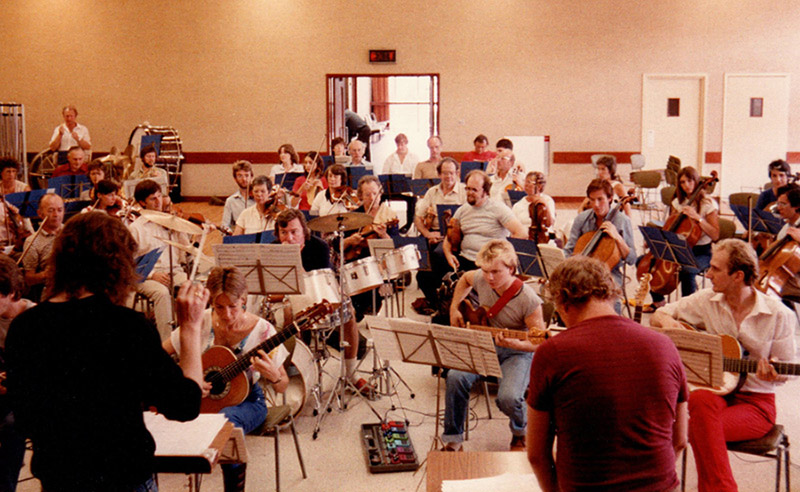 As for the orchestra, the line-up is fairly standard save for the exclusion of a full brass section — the nature of the work does not demand it.

My first aim in writing music is to reach the emotions of the listener, to lift their heart and soul above the trivia of our everyday existence and into a world of wonder and magic. This is the essence of “Wine Dark Sea”. I hope you will enjoy it.” …. Stephen Caudel July 1983