As explained in the CD inner sleeve notes, the origins of Return to Wine Dark Sea go back almost 40 years to when Stephen first wrote a symphonic work for guitar based on the story of Odysseus who sailed over the Wine Dark Sea in Homer’s epic poem The Odyssey.

In 1983 the work had its orchestral World Premiere in London conducted by the late, great Louis Clark with Stephen as a featured soloist.

Stephen subsequently improved and expanded the score but the opportunity to record it has only recently presented itself. Thanks to the advent of high quality, sampling and recording technology, Stephen has been able to build a new studio and work as sole performer and producer on what has proved to be the greatest recording challenge to date in his musical life. 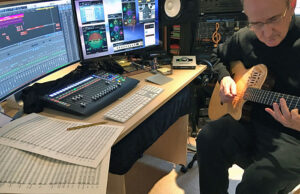